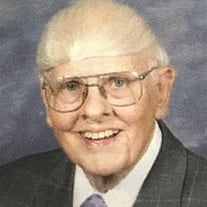 Charles William Waddill, 96, of St. Albans, West Virginia was called to his Heavenly Home on February 10, 2019 by his Lord and Savior. He is survived by sister Florine Kirts and in-laws Eddie and Patty Chandler, and Gaynor Chandler. He is loved and missed by his children and grandchildren: Vickie Waddill (daughter) and Marc Bird (grandson); Bill Waddill (son), Deborah Waddill (daughter-in-law), and Kelsey Waddill (granddaughter). Charles was born in 1922 and raised on the family farm in Clifton Forge, Virginia only hours away from New Kent where his ancestors first settled in the 1680s. After graduating from the Roanoke Business College at age 18 with an associate degree, Charles found his way to the Kanawha Valley to work for the Kanawha Valley Bank Trust Department and a few months later was hired by John L. Dickinson, President of the bank. After WWII broke out, Charles enlisted in the Coast Guard and served on the USS General W. M. Black for the Navy, sailing more than 125,000 miles on the ocean and transporting tens of thousands of soldiers during the war. When the war ended, he completed his bachelor’s degree and returned to work for Mr. Dickinson. He became Officer and Director of a number of the Dickinson family companies over the course of 72 years. In June of 1950, he married the love of his life - Doris Chandler. Their family found great joy in their loving community at Highlawn Presbyterian Church, which Charles attended for over six decades and served as treasurer, elder and deacon. Charles and Doris were blessed with 55 years together. Even in the last days of his life, the mere mention of his wife’s name brought a smile to his face. Charles was known as a man of high character, great compassion, and quiet service. He led with humble integrity and dignity in his office and home. In all of his nearly 97 years of life, he was infinitely optimistic. He enjoyed the people God placed in his life. We will miss you, Dad. The family would like to thank Dr. Jonathan Lilly, Home Hospice, and the Hubbard Hospice House for providing expert care for Charles. Those who wish to celebrate the life of Charles Waddill are invited to the visitation on Friday, February 15th from 6-8pm and the ceremony which will be held on Saturday, February 16th at 1pm, both at Highlawn Presbyterian Church, 2501 Washington Ave., St. Albans. Flowers or memorial donations may be sent to the Highlawn Presbyterian Church at 2501 Washington Ave, St. Albans, WV 25177. You may visit Charles’s tribute page at bartlettnicholsfuneralhome.com to share memories or condolences with the family. Bartlett-Nichols Funeral Home, (formerly Bartlett-Chapman Funeral Home) family owned and located at 409 Sixth Ave., St. Albans is honored to serve the Waddill family.

Charles William Waddill, 96, of St. Albans, West Virginia was called to his Heavenly Home on February 10, 2019 by his Lord and Savior. He is survived by sister Florine Kirts and in-laws Eddie and Patty Chandler, and Gaynor Chandler. He is... View Obituary & Service Information

The family of Charles William Waddill created this Life Tributes page to make it easy to share your memories.

Send flowers to the Waddill family.