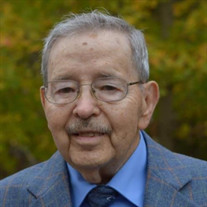 Edward D. Brown, 97, of St. Albans, passed peacefully on September 14, 2021 with family by his side. Little Brownie, as he was known to many, had been in Hospice Care for two weeks. Edward was born, December 28, 1923 to the late Edwin D. and Tressa M. Brown of Charleston. He was also preceded by his sister, Helen Bush (Arnold) of Charleston, son, Edwin Brown of Jasper, Alabama; grandsons, Gregory Hanson, Jr of Charleston, and Nicholas McCullar of Bessemer, Alabama. He is survived by his loving and devoted wife of over 50 years, Jane Brown; children, Denise Hanson of Charleston, Debra Sparks (Kenny) of Hurricane, John Brown (Jackie) of Jasper, Alabama, Richard Brown (Patty) of Nauvoo, Alabama, Susan Mote (Mike) of McCalla, Alabama, James Brown of Kimberly, Beverly McCullar, of Bessemer, Alabama; twin brother, Edwin Brown of Charleston; many grandchildren, great grandchildren and great great grandchildren. Little Brownie served in the United States Navy as a signalman and welder during WWII. He fought in three battles: Invasion of Normandy, France, Invasion of Southern France, and Okinawa GUNTO Operation. After active duty, Ed served in the Naval Reserves, the Seabee’s RMCB Detachment 0423 of South Charleston, until his retirement in 1987. Additional to his successful military career, and being an American Hero, Little Brownie was a successful business owner of Tri-Pro of Charleston, ACME Spring and Radiator of Charleston, and BFS Welding of Summersville. Little Brownie was an avid outdoorsman, fisherman, and all his neighbors knew him as a dog whisperer. His motto was, “You will never see grass growing under my feet.” A Funeral service for Little Brownie will be at 1:00 pm Monday September 20, 2021 at Bartlett-Nichols Funeral Home, St. Albans, with Pastor Kevin Previtt officiating. Friends may visit with the family one hour prior to the service at the funeral home. Entombment will follow at Elk Hills Memorial Park, Charleston, with military honors. In lieu of flowers, the family suggests donations to the Wounded Warrior Project at woundedwarriorproject.org. You may visit Little Brownie’s tribute page at bartlettnicholsfuneralhome.com to share condolences or memories with the family. There will be live streaming of the service in lieu of in person attendance on Bartlett-Nichols Funeral Home YouTube page. Bartlett-Nichols Funeral Home, family owned and located at 409 Sixth Ave., St. Albans is honored to serve the Brown family.

Edward D. Brown, 97, of St. Albans, passed peacefully on September 14, 2021 with family by his side. Little Brownie, as he was known to many, had been in Hospice Care for two weeks. Edward was born, December 28, 1923 to the late Edwin D. and... View Obituary & Service Information

The family of Edward D Brown created this Life Tributes page to make it easy to share your memories.

Send flowers to the Brown family.