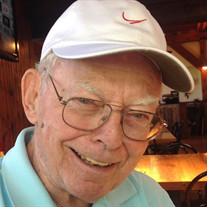 Edward Faulkner Maguire of St. Albans departed this life on Monday, February 18, 2019 due to injuries suffered in a fall at his home. He would have been 89 years old on February 25th. Ed was born in Boston, Massachusetts in 1930 to Bartholomew Edward Maguire and Annie Priscilla Faulkner Maguire. He was predeceased by his parents and his first wife Betty June Cash Maguire who passed away in 1989. He is survived by his second wife Billie Jean Cantrell McNabb Maguire; his sons Edward F. Maguire II and wife Diana of Charleston; Dennis Brian Maguire and partner Gene Bralewski of Palmetto, Florida; sister-in-law Bonnie Binford Maddox of Surfside, SC; and his step-children Linda Hull (Randy) of Columbus, OH; Nancy Crossetti (John) of Marston’s Mills, MA; Charles (Chuck) McNabb of Charleston, and numerous step-grandchildren and step-great-grandchildren. Ed was a 65-year member of the First Baptist Church, St. Albans. Ed graduated from Roslindale High School in Boston, and met his first wife Betty June Cash while both of them were visiting relatives in Oakridge, Tennessee. He served in the U. S. Army during the Korean Conflict, serving with the 194th Engineers. He married Betty in St. Albans in 1952 and they raised their two sons in the St. Albans-Nitro area. Ed and Betty took their sons camping all over the eastern U.S. Ed was employed by Union Carbide Corporation, first as a chemical operator and eventually as a computer analyst and programmer. Thanks to an opportunity from the company to take college-level training, he made a mid-career advancement into computer operations at Carbide and played a major role in the first ever plant-wide conversion to computers at the Institute Plant and the Tech Center. After 30 years of service, he and Betty both took early retirement and enjoyed winters in Florida. After Betty’s premature death in 1989, Ed met Billie Jean McNabb and they married in 1992. Then began an amazing and full second marriage for them both that lasted until Ed’s passing. They traveled extensively across the country and enjoyed a winter home in Myrtle Beach, SC and a “camp” in Greenbrier County. Their active, independent lifestyle was a wonder to their family and friends, and they were blessed with good health well into their eighties. Their daily routine was always to “get out and go somewhere.” In his own words: Ed loved God, family, friends and most other people. Funeral service will be held at 11:00 am Saturday, February 23, 2019 at Bartlett-Nichols Funeral Home, St. Albans with the Rev. Joel M. Harpold and Rev. Steven Smith officiating. Burial will be in Cunningham Memorial Park, St. Albans. Friends may call from 6:00 to 8:00 p.m. Friday at the funeral home. In lieu of flowers the family suggests donations to the United Disciples of Christ, 100 United Disciples Drive, South Charleston, WV 25309; First Baptist Church, 6th Avenue & Second St., St. Albans, WV 25177; or the Forks of Coal Natural Area Foundation, P.O. Box 5556, Charleston, WV 25361. You may visit Ed’s tribute page at bartlettnicholsfuneralhome.com to share memories or condolences with the family. Bartlett-Nichols Funeral Home (formerly Bartlett-Chapman Funeral Home) family owned and located at 409 Sixth Avenue, St. Albans is honored to serve the Maguire family.

Edward Faulkner Maguire of St. Albans departed this life on Monday, February 18, 2019 due to injuries suffered in a fall at his home. He would have been 89 years old on February 25th. Ed was born in Boston, Massachusetts in 1930 to Bartholomew... View Obituary & Service Information

The family of Edward Faulkner Maguire created this Life Tributes page to make it easy to share your memories.

Send flowers to the Maguire family.