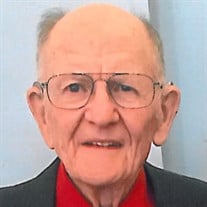 Gerald K. Perry, 84, of St. Albans, WV, went home to be with the Lord on Saturday, March 23, 2019 following a prolonged illness. Born April 13, 1934 in Boone County to the late Charles F. and Nina Cook Perry. He was also preceded in death by a brother, Elwood Perry. He served in the WV Army National Guard and the U.S. Army from 1956 - 1962, wherein he received an Honorable Discharge. Perry received a Bachelors of Education (1955) and Masters of Educational Administration (1962) degrees from Marshall University. He served the state of West Virginia’s students throughout his career, first as an elementary teacher/coach/principal in Sharples, WV and St. Albans, WV. Gerald served as an Extension instructor at Glenville State College, WV University, Beckley, and at WV State College in Institute throughout the early1970s. He was a coordinator for Kanawha County Schools during this same period of time. Gerald moved to the WV State Department of Education, where he would serve for the remainder of his career in various roles. He served over 20 years as the state’s Coordinator of Textbook Adoptions in the Bureau of Learning Systems, a position which led him to hold national offices in various education associations. Most notably, he was elected president of the National Association of State Textbook Administrators (NASTA) in 1980. Education was always first and foremost his passion and duty. Gerald was a member and officer of Highlawn Presbyterian Church in St. Albans for decades, the congregation of which he truly loved and cherished. Upon retirement, Gerald enjoyed spending time in Cherry Grove, SC where he fished regularly and made friends daily, spending part of every year in the oceanside town that he considered to be his second home. He was widely known and loved by those in the Cherry Grove community. Attending Marshall University football and basketball games was a passion of his, supporting the teams and school that he so dearly loved. Gerald was a season ticket-holder at Marshall football games for most of his life, and rarely missed a game. Always making friends, Gerald loved getting to know new people from every walk of life. He never met a person who was a stranger. Gerald is survived by his wife of 61 years, Ruth; two sons, Geoff Perry (Lori Caldwell-Perry) of Charleston, WV and Greg Perry (Jennifer Leyden Perry) of Huntington; three grandchildren - Julia Perry of Huntington, WV, Audrey Morgan (and husband Bud Morgan) of Indianapolis, IN, and David Godwin of Charlotte, NC; one great-granddaughter, Riley Morgan of Indianapolis, IN. Gerald is also survived by a brother, Rev. Gene Perry of Knoxville, TN. Friends may visit with the family from 6 to 8 p.m. Tuesday, March 26, 2019 at Bartlett-Nichols Funeral Home in St. Albans. The funeral service will be held at 11:00 a.m. Wednesday, March 27, 2019 at Highlawn Presbyterian Church, 2501 Washington Ave., St. Albans with Pastor Nancy Didway presiding. Burial will follow in Cunningham Memorial Park in St. Albans with military honors. In lieu of flowers the family suggests donations to,Highlawn Presbyterian Church, In Memory of Gerald K. Perry, 2501 Washington Ave., St. Albans, WV 25177. You may visit Gerald’s tribute page at bartlettnicholsfuneralhome.com to share memories or condolences with the family. Bartlett-Nichols Funeral Home, (formerly Bartlett-Chapman Funeral Home), family owned and located at 409 Sixth Ave., St. Albans is honored to serve the Perry family.

Gerald K. Perry, 84, of St. Albans, WV, went home to be with the Lord on Saturday, March 23, 2019 following a prolonged illness. Born April 13, 1934 in Boone County to the late Charles F. and Nina Cook Perry. He was also preceded in death... View Obituary & Service Information

The family of Gerald K. Perry created this Life Tributes page to make it easy to share your memories.

Send flowers to the Perry family.