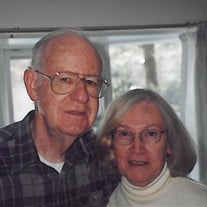 Helen Barbara Wood, 85 of Brooklyn, CT. died July 20th, 2019 in St. Albans, West Virginia. She was the beloved wife of the late Ronald John Wood. They were united in marriage on September 3rd, 1960 at St. Benedicts Church, Stamford, CT. In addition to her husband she leaves a son, Lawrence M. Wood, his wife Susan E. Wood and 3 grandchildren Jesslyn, Payton and Christopher Wood. She is the daughter of the late Katherine (Bilicic) Billick and Ignac Billick. She was preceded in death by her brother, James. She leaves a niece Karen Destefanis and her husband, Edward, great niece Nicole Destefanis, sister-in-law Judith Billick all of Norwalk and nephew David Billick of Bethel. Helen was born January 27, 1934 in New York, NY. She attended schools in Stamford graduating from Stamford High School in 1951 and received a degree from Quinebaug Valley Community College, Danielson, CT. Most of her working years were in banking. She was a communicant of Our lady of La Salette Church and small Christian community with a group of cherished friends. Her enjoyments include tending to her gardens, photography, and traveling. A highlight of her life was the trips she made to Croatia where she was introduced to relatives and walked the former paths of her parents. She was a former member of Brooklyn and Plainfield Garden Clubs, Quinebaug Valley Photography Club, Brooklyn Historical Society, Croation Fraternal Union of America, Quinebaug Valley Senior Citizens and Learning in Retirement at Quinebaug Valley Community College. Helen will be remembered for her devotion to family life. Funeral arrangements have not been set while a private service is planned. The family request in lieu of flowers that you would donate to your local church to help those in need. You may visit Helen's tribute page at Bartlettnicholsfuneralhome.com to share memories or condolences with the family. Bartlett-Nichols Funeral Home, located at 409 Sixth Ave., St. Albans is honored to serve the Wood family.

The family of Helen Barbara Wood created this Life Tributes page to make it easy to share your memories.

Send flowers to the Wood family.