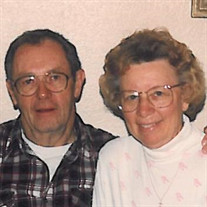 Jesse DeWayne Hall, 93, of Cross Lanes, entered into eternal rest and was received by his Lord and Savior, Jesus Christ. He was born on April 1, 1926, in Butler, Pennsylvania, to the late George and Mabel McConnell Hall. He was preceded in death by his brothers, Bill, Horace, Harry and Roy Hall, and his sisters, Edith and Mary Mershimer. He was truly an April Fool’s guy who loved being a prankster whether it be in school, or on the farm. He loved to laugh, tell jokes, and he made everyone around him feel special. He was a proud and patriotic man who served in the Army during WWII, in the 94th Infantry, in Patton’s third army. He fought in the Battle of the Bulge and was very proud to serve America. He was an elder for Perrow Presbyterian Church for many years, where he taught Sunday School to both young people and adults, led opening exercises before Sunday School, which he always opened with a joke. Jesse loved his beloved wife of 67 years, Frieda. He cherished her more than anything and would often say the best thing that ever happened to him was when she married him. He loved his family and placed them before himself. Whether it was forfeiting sleep to attend Forrest’s football and baseball games, or Gretchen and Forrest’s marathon track meets, he was there. He was also very proud of his three grandchildren, Megan, whom he would always ask for a loan, Becca, who he always made sure she had enough money and was behaving herself at WVU, and Reggie, who cherished their time together at McDonald’s for breakfast. In his difficult journey with Alzheimer’s, he never lost his sense of humor, the desire to protect his family, or the wonderful prayers he would pray. He is survived by his children, Gretchen, Darryl and Reggie Pinner, of Asheville, NC, and Forrest, Lisa, Megan and Becca Hall of Nitro. He is also survived by his sister, Dorothy (Rod) Thorpe of Dayton, OH. A Celebration of Life service will be held at 2:00 pm Tuesday, July 23, 2019 at Perrow Presbyterian Church, 5345 Big Tyler Road, Cross Lanes with the Rev. Ryan Fulmer officiating. Burial will follow in Tyler Mountain Memory Gardens, Cross Lanes. The family will receive friends one hour prior to the funeral service at the church. In lieu of flowers the family request donations to Alzheimer’s, Association West Virginia Chapter, In Memory of Jesse D. Hall, 1601 2nd Ave., West, Charleston, WV 25387. Well done, good and faithful servant, enter into your rest! You may visit Jesse’s tribute page at bartlettnicholsfuneralhome.com to share memories or condolences with the family. Bartlett-Nichols Funeral Home, family owned and located at 409 Sixth Ave., St. Albans is honored to serve the Hall family.

Jesse DeWayne Hall, 93, of Cross Lanes, entered into eternal rest and was received by his Lord and Savior, Jesus Christ. He was born on April 1, 1926, in Butler, Pennsylvania, to the late George and Mabel McConnell Hall. He was preceded in... View Obituary & Service Information

The family of Jesse D. Hall created this Life Tributes page to make it easy to share your memories.

Send flowers to the Hall family.