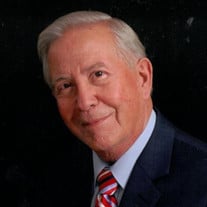 John Russell Hendrickson of Scott Depot, WV, passed away Thursday, April 7, 2022 following a short illness. He was the son of the late Alexander H. and Emma Jane Shackelford Hendrickson of Mt. Nebo in Nicholas County. He was also preceded in death by his sisters, Edith Baker and Nora Jean Lipscomb and brothers, Alexander, Jr., Lysle, Bernard and Judson. John graduated from Nicholas County High School where he was a member of the band. After graduation, he worked in Washington D. C. where he was drafted in to the US Army during the Vietnam War. Upon completion of his duties in the US Army, he returned to Washington where he briefly worked before entering Marshall University. After receiving both his Bachelor and Master degrees, John worked as a reporter for the Charleston Daily Mail. John left the Daily Mail to assume a position with the WV Board of Regents, a position he held until he moved to WV State College (University) where he worked until his retirement. He was a member of the Mount Vernon Baptist Church, Hurricane, WV, Summersville Masonic Lodge # 76 A.F. & A.M ., Scottish Rite Bodies, Charleston and the James E. Marshall Post 187, Winfield, WV. John is survived by his wife of 47 years, Linda Barker Hendrickson, his brother, William Hendrickson of Mount Lookout, Nicholas County and many nieces and nephews. Funeral service will be held at 11:00 a.m. Monday, April 11, 2022 at Bartlett-Nichols Funeral Home, St. Albans with the Rev. Ron McClung, pastor of Mount Vernon Baptist Church, officiating. Burial will be in Cunningham Memorial Park, St. Albans with Military Honors conducted by the James E. Marshall American Legion Post 187, Winfield. The family will receive friends from 2 to 4 p.m. Sunday at the funeral home. You can visit John’s tribute page at BartlettNicholsFuneralHome.com to share condolences or memories with the family. Bartlett-Nichols Funeral Home, family owned and located at 409 Sixth Ave., St. Albans is honored to serve the Hendrickson family.

John Russell Hendrickson of Scott Depot, WV, passed away Thursday, April 7, 2022 following a short illness. He was the son of the late Alexander H. and Emma Jane Shackelford Hendrickson of Mt. Nebo in Nicholas County. He was also preceded in... View Obituary & Service Information

The family of John Russell Hendrickson created this Life Tributes page to make it easy to share your memories.

Send flowers to the Hendrickson family.