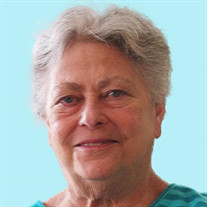 Judith Ann Warner Ferrari, 76, of Nitro, went home to be with the Lord after spending time in Charleston Hubbard Hospice House, due to an extended illness. Judy was born August 4, 1944, the only daughter of the late Gay Neal Warner and Lona Pauline Woodall Warner. Completing the Warner family were her brothers, Neal (Lu) Warner of Madison, VA and Jimmy (Michelle) Warner of Lewisburg, WV. Also left to cherish Judy’s memory are her immediate family, which includes sons and daughters-in-law, Edward Ray Ferrari and wife, Beth Gibson Ferrari, Stanley Eugene Ferrari and wife, Vanessa Mullins Ferrari. Her most prized possessions were her grandchildren Ethan, Katelin and Hunter (Kasie) Ferrari. Growing up in Nitro, Judy was a 1962 graduate of Nitro High School. After marrying and becoming a mother, she raised her boys in Hurricane. When her sons were grown, Judy moved back to her mother’s home and cared for her until her death in 2011. Family was her greatest joy and Judy spent many happy times as part of the Ferrari household, coming to live with Eddie and Beth in 2017. Eddie became a devoted caregiver to his mother when she became unable to care for herself. Judy was greatly loved and shared that love in return. A 25-year employee of Union Carbide in South Charleston, Judy managed the sign shop and worked as a painter and sandblaster. Becoming a Christian at an early age, Judy continually sought the Lord’s guidance throughout her life. She was a member of Red House UBI Church and later attended Teays Valley Church of God until her death. A homegoing service to celebrate Judy’s life was held Friday, May 28, 2021, with the Rev. Dr. Melissa S. Pratt officiating. Burial followed in Cunningham Memorial Park. Donations in Judy’s memory may be sent to Teays Valley Church of God Building Fund, P.O. Box 270, Scott Depot, 25560 or Hubbard Hospice House, 1001 Curtis Price Way, Charleston, WV 25311. You may visit Judy’s tribute page at BartlettNicholsFuneralHome.com to share memories or condolences with the family. Bartlett-Nichols Funeral Home, family owned and located at 409 Sixth Ave., St. Albans is honored to serve the Ferrari family.

Judith Ann Warner Ferrari, 76, of Nitro, went home to be with the Lord after spending time in Charleston Hubbard Hospice House, due to an extended illness. Judy was born August 4, 1944, the only daughter of the late Gay Neal Warner and Lona... View Obituary & Service Information

The family of Judith Ann Warner Ferrari created this Life Tributes page to make it easy to share your memories.

Judith Ann Warner Ferrari, 76, of Nitro, went home to be with...

Send flowers to the Ferrari family.