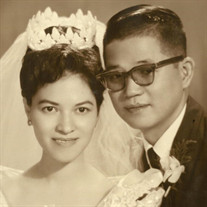 Leoncia Madridejos Santiago, mother, wife, devout Franciscan, and pioneer, passed away on Tuesday, June 1, 2021, at the age of 86. She is preceded in death by her husband, Dr. Loreto S. Santiago. She leaves behind her three daughters, Lorelee Wilkes and husband Sam, Jo Anne Stafford and husband John, and Gerardeen and husband Anthony, and four grandsons, Drew, Noah, Hunter, and Bryce, along with a legacy of a life spent practicing her Catholic faith. She always placed the needs of others before her own and never spoke an unkind word to or of others, in both her personal and her professional life. She had a passion for orchids, gardening, cooking, and music. She was a pioneer woman of the 20th century. As a child in the Philippines during WWII, she survived the Japanese occupation by fleeing into the mountains and jungles outside the village of Paete, Laguna, in the province of Luzon. She attended Centro Escolar University, an institution founded in 1907 by two trail-blazing women, and became a pharmacist. She came to the United States in the late 1950s to further her education and training, and met the man who became her husband. They returned to the Philippines, where they married and lived before immigrating back to the US with their young children in 1973. She worked as a cyto-histotechnologist at the University of Medicine and Dentistry of New Jersey and at the Charleston Area Medical Center. While at CAMC, she helped develop cutting-edge techniques in the histology of cancer. She will be remembered as a person of strength, patience, and kindness, who quietly exemplified feminist ideals and one who lived a devout life in Christ with true humility and grace. She will be sorely missed. Mass of Christian Burial will be held at 11:00 a.m., Wednesday, June 9, 2021, at St. Francis of Assisi Catholic Church, St. Albans, with Father Patrick M. McDonough as celebrant. Burial will follow in Sunset Memorial Park, South Charleston. The family will receive friends one hour prior to the Mass at St. Francis of Assisi Catholic Church. In lieu of flowers, memorials may be made to the St. Francis of Assisi Catholic Church in St. Albans, WV, the Edgewood Summit and Arthur B. Hodges Center in Charleston, WV, and HospiceCare WV in Charleston, WV. You may visit Leoncia’s tribute page at BartlettNicholsFuneralHome.com to share memories or condolences with the family. Bartlett-Nichols Funeral Home, family owned and located at 409 Sixth Ave., St. Albans is honored to serve the Santiago family.

Leoncia Madridejos Santiago, mother, wife, devout Franciscan, and pioneer, passed away on Tuesday, June 1, 2021, at the age of 86. She is preceded in death by her husband, Dr. Loreto S. Santiago. She leaves behind her three daughters, Lorelee... View Obituary & Service Information

The family of Leoncia Madridejos Santiago created this Life Tributes page to make it easy to share your memories.

Send flowers to the Santiago family.