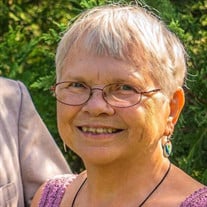 Rev. Dr. Mary Leah Bhame Pope August 25, 1946- April 25, 2021 Mary Leah Bhame was born to Roy and Marge Bhame and grew up on a farm outside Zelienople, Pennsylvania. Roy was a farmer, and Marge taught school and played the organ at the Presbyterian Church in nearby Ellwood City. Roy and Marge died many years ago. Mary grew up with a good appreciation for music via her mother and her mother’s family, the Streeter family. She was an accomplished pianist and organist and occasionally played the clarinet. On her own she developed an interest in sewing, and over years developed that interest into a professional skill. She loved cooking and developed that into a lifelong proficiency. In 1968 she accomplished a Bachelor’s in Music at Westminster College in New Wilmington, PA. Later that year she began attending the Southern Baptist Theological Seminary in Louisville, Kentucky as she pursued a Masters Degree in Church Music. At the seminary in 1969 she met Charles Pope, her husband to be. They were married on December 22, 1970 at Christ Church United Presbyterian in Ellwood City. As Charles and Mary were completing their degrees at the seminary in 1972, a daughter, Sarah Christine Pope, was born to them. The next six years saw Mary and Charles in Maryland and Texas as Charles worked as a Baptist minister and trained as a Hospital Chaplain. In 1975 a son, James Adam Pope, was born in Maryland. In Corpus Christi, TX Mary worked as a choir director at a Methodist church. The couple moved to Charlottesville, Virginia in 1978 as Charles pursued chaplaincy. As the two children grew into school years, Mary was able to work as a Choir Director in a nearby Episcopal Church. It was there that she met Carolyn and David Holmes and Claire and John Whittaker who would become lifelong friends and essentially family. Both she and Charles were confirmed in the Episcopal Church in 1984. The early to mid 80’s saw Mary and Charles in Atlanta, GA as Mary worked Toward a PhD in Liturgy, Music, and Theology at Candler School of Theology, Emory University. Accomplishing that in 1985 they moved to Le Mars, Iowa where she taught Christian Education at Westmar College and served as College Chaplain. In Iowa in 1990 the couple adopted their third child, Leah Rachel Pope. Also in Iowa, Mary was ordained as a Methodist minister and, over years, served 3 congregations in Iowa. In Des Moines, Iowa she also served as Pastor in two Presbyterian churches and for a year was Director of Christian Education at an Episcopal Church. The last seven years of her professional life saw her as a Hospice Chaplain at Hospice of Central Iowa in Des Moines. After moving to West Virginia in 2014, Mary served in a post-retirement position at the Episcopal Diocese of West Virginia as she directed the Iona Program. She loved history, as we visited many historic sites over the years. She loved growing things. In the spring a special light would come into her eyes as she talked about seeds and planting. She loved holiday family dinners. She loved our trips to the Outer Banks of North Carolina. Musician, seamstress, cook, devoted wife and mother, college professor, ecumenical advocate, ordained minister, and chaplain, her life shines as a beacon of love, joy, and service. We are missing her terribly. But we cannot but be grateful for the blessedness of her life. On May 4 visiting hours and service will be held at St. Mark’s Episcopal Church, 405 B Street in St. Albans, West Virginia, Visiting hours begin at 2:00 P.M. and end at 5:00 P.M. The service will begin at 7 PM. It will be live streamed on the Facebook page of Ray Shackleford. Tune in at 6:55 PM. The in-person service will include family only. In the visiting hours people will be admitted one domicile at a time. During the visiting hours and the service, masks will be required. All attendees are asked to maintain proper spacing. Music during the visiting hours will be live streamed from the Facebook page of Rachel Taylor. Music will be played at 2, 3, and 4 PM for 20 minutes each time. Tune in at 1:55, 2:55, and/or 3:55. Memorial gifts should be designated to support the music program of St. Mark’s Episcopal Church. Monetary gifts may be made electronically. Go to the web site of the Episcopal Diocese of West Virginia, click on E-Giving. A list of parishes will appear. Click St. Mark’s, designate your gift as indicated , and have a credit card ready. Interment of cremains will occur on May 8 at Steadman Baptist Church Cemetery in Steadman, Georgia at 1:30 PM. Presiding at the service at St. Mark’s will be the Rev. Kent Higgins of Charleston, West Virginia, a friend of the family. Our family: husband Charles, daughter Sarah Pope Miksinski, with husband, Ted, and son Adam, son Jim Pope, with wife Abby Goldsmith, daughter Leah Pope, with fiancée Joe Craven, Mary’s brother, Ken Mitchell, with wife Janeine, and lifelong friends Carolyn Holmes and Claire Whittaker, are glad to greet you at the visiting hours. You may visit Mary’s tribute page at BartlettNicholsFuneralHome.com to share memories or condolences with the family. Bartlett-Nichols Funeral Home, family owned and located at 409 Sixth Ave., St. Albans is honored to serve the Pope family.

Rev. Dr. Mary Leah Bhame Pope August 25, 1946- April 25, 2021 Mary Leah Bhame was born to Roy and Marge Bhame and grew up on a farm outside Zelienople, Pennsylvania. Roy was a farmer, and Marge taught school and played the organ at the Presbyterian... View Obituary & Service Information

The family of Rev. Dr. Mary Leah Bhame Pope created this Life Tributes page to make it easy to share your memories.

Send flowers to the Pope family.