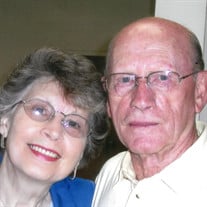 Otis G. “Chuck” Helper, Jr., 95, of St. Albans, passed away September 1, 2021 after a short illness. He was preceded in death by his parents, Otis G., Sr. and Clara Dell Drake Helper. He was also preceded in death by his brothers, Eugene, Jack, Herbert; sisters, Gladys, Edna, Freeda and Betty; daughter-in-law, Linda Jo Bailey Helper. Otis is survived by his loving wife of 76 years, Lenora Ruth Mace Helper; three children, Alan Helper (Mona) of Manassas, VA, David Helper (Shirley) of Spencer, Pam King (Steve) of Hurricane, Eight Grandchildren; Fifteen Great Grandchildren; plus numerous nieces, nephews and friends. Otis was born and raised in Newton, West Virginia. He was a proud graduate of Spencer High School, class of 1944. He enlisted in the Army Air Corp as a junior and was accepted in the cadet program for pilots, navigators and bombardiers. Upon graduation, he entered active duty. After basic training, he was reclassified as an airplane mechanic because there was a shortage. After completion B-17 training, he went on to advance training on B-29 aircraft. Two weeks short of his completion in the training, the war ended. Chuck and Lenora were married in Gulfport, Mississippi on July 7, 1945 while he was stationed at Keesler Field in Biloxi, Mississippi. He worked 35 years at Union Carbide, Institute Plant as an instrument technician. Chuck was a wonderful loving husband, father, grandfather and great grandfather, friend and neighbor. He will surely be missed by all who knew him. He treasured his faith in God, his family and his country. Chuck was a man of great integrity. Our family was truly blessed to have him as our patriarch all these years. He was a faithful member of the Pine Grove Church of Christ, Scott Depot. It was here that he accepted Christ as his Lord and Savior and was baptized. Funeral service will be held at 2:00 p.m. Tuesday, September 7, 2021 at Bartlett-Nichols Funeral Home, St. Albans with Minister Jack Gilchrist officiating. Entombment will follow in Cunningham Memorial Park, St. Albans.The family asks that all visitors be either vaccinated or wear a mask. The family will receive friends one hour prior to the funeral service at the funeral home. You may visit Chuck’s tribute page at BartlettNicholsFuneralHome.com to share memories or condolences with the family. Bartlett-Nichols Funeral Home, family owned and located at 409 Sixth Ave., St. Albans is honored to serve the Helper family.

The family of Otis G. "Chuck" Helper Jr. created this Life Tributes page to make it easy to share your memories.

Send flowers to the Helper family.