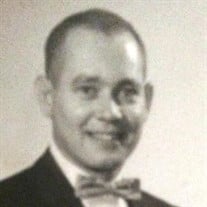 Robert L. “Bob” McNeer, 94, of St. Albans went home to be with the Lord on Monday, February 7, 2022 at Hubbard Hospice House-West, South Charleston. He was born on May 21, 1927, in Portsmouth, Ohio, the only son of the late Bernard and Marjorie McNeer. On August 25, 1955, he married Jeannine Deem of Nitro and they started life together for the next 62 years. Bob now joins his beloved wife who preceded him in death on February 27, 2018. They both were members of Highlawn Presbyterian Church, St. Albans since 1956. Bob served in the United States Navy during World War II and later in the Korean War. He graduated from the University of Kentucky with a bachelor’s and a master’s degree in Industrial Chemistry. He started to work for Union Carbide in November 1953 at the Institute Plant and retired from the plant in 1990. Upon retirement, he worked as an environmental regulatory consultant until 2011. Bob is survived by his daughter, Terry Neack of Mason, Ohio and son, Mark McNeer of Evansville, Indiana and four grandchildren, Ian Neack, Evan Neack, Nicholas McNeer and Matthew McNeer. Funeral service will be held at 11:00 a.m. Friday, February 11, 2022 at Highlawn Presbyterian Church, St. Albans with Pastor Nancy Didway officiating. In lieu of flowers the family suggests donation to Highlawn Presbyterian Church, In Memory of Bob L. McNeer, 2501 Washington, Ave., St. Albans, WV 25177. You can visit Bob’s tribute page at bartlettnicholsfuneralhome.com to share condolences or memories with the family. Bartlett-Nichols Funeral Home, family owned and located at 409 Sixth Ave., St. Albans is honored to serve the McNeer family.

The family of Robert L. "Bob" McNeer created this Life Tributes page to make it easy to share your memories.

Send flowers to the McNeer family.