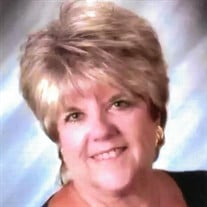 Sherry Ann Wroten Taylor, 72, of Hurricane, passed away unexpectedly March 9, 2022 at CAMC Teays Valley Hospital. She was the only child to the late Lenford “Jiggs” and Ollie “Elsie” Woodard Wroten. Sherry was a majorette and a graduate of St. Albans High School, class of 1967, and a graduate of West Virginia University. She served as a homeroom mother, substitute teacher, assistant Girl Scout leader, volunteer at Lakewood Elementary, which she played Witch Hazel during Halloween, Hayes Junior High and St. Albans High School during her children’s school years and a member of St. Andrew United Methodist Church, St. Albans. She too loved living “On the Hill” surrounding Zerkle Street in St. Albans. She was currently the executive director of WV State Rehabilitation Council and a founding member as well as the Vice President/Treasure of the National Coalition of State Rehabilitation Councils. Sherry served as a board member of Ten Up Ministries. She currently was a realtor for Runyon and Associates, whom she loved, as well as coworkers and her clients that became more than just friends. Runyon and Associates meant so much to Sherry, as well as prior jobs that she considered “home”. She was an Executive Director of ARC of the Three Rivers, which she was employed for 8 years working along with United Way and was considered a champion for all whom she served, clients and staff. Also, a director for Broadmore Assisted Living and Dunbar Americare Nursing Home. Sherry was a member Beta Sigma Phi, Delta Theta-sorority where she held several offices. She loved playing bunko and poker keeno with Ruth, Cindy, Millie, Joan, Linda and Susan. She is survived by her husband, Paul M. Taylor, II; son, Eric Taylor (Betsy Ayers) of Barboursville; daughter, Destiny Taylor of Scott Depot; grandchildren, Taylor Miles (Ashley), Christopher Drew Taylor (Ashley), Olivia Taylor, Griffin Taylor (Maitlyn), Sophia Taylor, Maddie Ayers and Bryar Ayers; great grandbabies, Gage, Avery, Brody, Aria, Ivy and Hudson whom she adored. Sherry cherished her whole family, coworkers, neighbors, her many friends and would do anything in the world for anyone, including the many that she will help by being an organ donor. She will be missed by all and never forgotten. Funeral services will be held at 2:00 p.m. Sunday, March 13, 2022 at Bartlett-Nichols Funeral Home with Pastor Larry Wood officiating. Interment will follow in Cunningham Memorial Park, St. Albans. The family will receive friends from 11 to 2:00 p.m. prior to the funeral service. In lieu of flowers, the family suggests memorial contributions be made to the ARC of the Three Rivers, 114 Lee Street, West, Charleston, WV 25302, or Ten Up Ministries, Inc., 2333 MacCorkle Avenue, St. Albans, WV 25177. You can visit Sherry’s tribute page at bartlettnicholsfuneralhome.com to share condolences or memories with the family. Bartlett-Nichols Funeral Home, family owned and located at 409 Sixth Ave., St. Albans is honored to serve the Taylor family.

The family of Sherry Ann (Wroten) Taylor created this Life Tributes page to make it easy to share your memories.