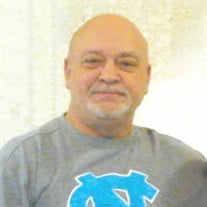 Stephen Michael Pauley, of St. Albans, born June 4, 1952, left this world on January 6, 2021. In his passing, he left a mark on the hearts and minds of so many. To all who knew him, Steve was a funny, independent, carefree soul who could be incredibly stubborn, but who loved his family and friends with a genuine passion. Steve leaves behind Pam Pauley, his loving wife of 10 years (20 years together), his sister-in-law, Diana Pauley, who was more of a genuine sister to him, his nephew and partner in crime, Kevin Pauley; great nephew, Cameron, his stepson, Jason Woodyard and his wife Kathleen, step grandchildren, Jake and Kate and his beloved faithful furbabies, Marco and Petie. He is preceded in death by his parents, Glenn A. Pauley and Lois A. Blackburn Pauley; great nephew, Jordan Pauley, and his dearly beloved brother and best friend, Glenn O. Pauley. Like his brother before him, Steve was a loyal public servant. He worked for the WV Department of Motor Vehicles until 2011 and prior to that, as owner of Willard’s Licensing Service. Like his brother, he was a member of the Elks Lodge #202, where he helped many local children and was known around the country for his bowling skills. Those who knew Steve, knew him to be the life of the party. He was known for his award-winning prowess as a bodybuilder and weightlifter in the 1980’s. He was respected as an athlete in high school and in local organized sports. Steve always had the fastest, newest cars on the market. For many, the word “Corvette” is synonymous with Steve. He was always laughing, loved a good joke or a good comedy film, lived for college football and loved spending time with his friends and family. Nothing mattered more to him than family and, for many of his friends, they were his extended family. Whether it was at the Admiral’s Anchor, Romeo’s Place, or even just at his house, Steve was always living life to the fullest, spending time with family and friends. He was always making and leaving amazing memories all along the way. Steve will be missed by so many as he was constantly out in the world making new friends and keeping up with old ones. He was a beloved member of his family and was always ready to go above and beyond for them at any time. If you were a part of his life, it is for sure he will remain a part of yours and your memories will most likely be of him smiling and laughing. If you were his friend, you were his friend for life. If you were his family, you meant more to him than words can say. Many would say that in his earlier days, Steve could be a bit wild, but as the saying goes, “it’s better to be wild than boring”. Steve Pauley will never be remembered as boring. In lieu of flowers, the family asks that you would please make a donation in his memory to one of his three favorite charities, the ASPCA, St. Jude’s Foundation or Feed the Children. All three of these charities he proudly supported. Funeral service will be held at 11:00 a.m. Monday, January 11, 2021 at Bartlett-Nichols Funeral Home, St. Albans with Celebrant H.R. Whittington officiating. Burial will be in Tyler Mountain Memory Gardens, Cross Lanes The family will receive friends from 10:00 to 11:00 a.m. prior to the funeral service at the funeral home. You may visit Steve’s tribute page at BartlettNicholsFuneralHome.com to share memories or condolences with the family. Bartlett-Nichols Funeral Home, family owned and located at 409 Sixth Ave., St. Albans is honored to serve the Pauley family.

Stephen Michael Pauley, of St. Albans, born June 4, 1952, left this world on January 6, 2021. In his passing, he left a mark on the hearts and minds of so many. To all who knew him, Steve was a funny, independent, carefree soul who could be... View Obituary & Service Information

The family of Stephen Michael Pauley created this Life Tributes page to make it easy to share your memories.

Send flowers to the Pauley family.