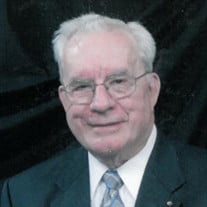 Thomas Edwin Tabor 87 of Hurricane, WV died January 25, 2021 at his home in Hurricane, WV of natural causes. Mr. Tabor was born in Charleston, WV, August 2, 1933 as the only child of the late Edwin W. Tabor and Gwelda Mallory Tabor of Charleston, WV. He married Marjorie Y. Miller of Belpre, OH, November 28, 1954, who preceded him in death in 2002. In April of 2004, Tom happily married a high school classmate, Barbara Currey Fisher, and moved to Hurricane, WV. Mr. Tabor is survived by his loving wife, Barbara (Bobbie). He is also survived by his beloved children: son, Randall A. (Vicki) of Powder Springs, GA, and daughters, Lisa M. Tabor of Woodstock , GA, Vicki J. Zahand (Abe) of Houston, TX, and Cynthia T. Hayes (Doug) of Longwood, FL, ten grandchildren, 12 great-grandchildren, as well as stepdaughter Pamela Willis (Terry) of St. Albans, WV, step-son David C. Fisher, MD (Mitch), of Columbia, SC, one step-grandson and three step-great-grandchildren. Also surviving, his cousins, Sharon Mallory Griffith (Don) and Judi Mallory, whom he loved dearly like sisters. He was loved by many near and far. He was a proud 1950 graduate of Stonewall Jackson High School in Charleston, WV, attended Morris Harvey College (nka University of Charleston) and graduated from Duke University in Durham, NC, in 1956 with a B.S. in Mechanical Engineering. After graduation Tom worked for North American Aviation in Columbus, OH, as a Flight Test Engineer for Power Systems from 1956 to 1963. He returned to Charleston in 1963 as a design engineer and contractor at Goff-Matthews Plumbing Company, later Tabor, Inc. until 1972. He then moved his family to State College, PA, to work for Pennsylvania State University as a Professional Engineer, later a Senior Engineer, and then an Energy Conservation Engineer in the Office of Physical Plant until his retirement in 1996, in the Design and Utility sections. During this time, his family’s blood began to turn true blue & white! WE ARE! Music was a big part of Tom’s life. He was a skillful piano player, with extensive piano study from early elementary school through high school. In college, he sang in and traveled with the Duke Men's Glee Club, as well as in the Duke Chapel Choir. Tom directed Sweet Adeline's barbershop choruses in both Charleston, WV, and State College, PA. He was most famous for family sing-alongs around the piano! Mr. Tabor was a member of Masonic Lodge Kanawha # 20 A.F.& A.M., Scottish Rite Masons, York Rite Masons, and Beni Kedem Shrine Temple all of Charleston, WV, and visited various lodges, including No. 700 in State College. He formed and was the first president of the Berwick Park Civic Association, in Columbus, Ohio. He was active in the Soap Box Derby in Columbus, OH, Charleston, WV and for 20 years in State College, PA. He was a Charter-Founder and Life Member of the Kanawha Valley Soap Box Derby Association, and was elected the first President and Derby Director of the Central Pennsylvania Soap Box Derby Association Tom had been an avid bowler and golf enthusiast. He was an active member of the Penn State University Emergency Squad for Beaver Stadium and Recreation Hall for 21 years and was a committed volunteer for the State College Area High School marching band for 14 years. Tom became a CPR instructor for the American Heart Association in 1976 and taught for many years. As an avid fan of the Lady Lion Basketball team in the 1980s and ‘90s, he and Marjorie became early members of the Penn State Lady Lion Cager Club. They were also American hosts for numerous foreign students who came to Penn State, keeping in touch with many of them even after they moved away. He had been a member of the State College Presbyterian Church and later the Gateway Church in St. Albans, WV. The family will receive friends from 1 to 2:00 p.m. prior to the funeral service. The funeral service will be held at 2:00 p.m. Thursday, January 28, 2021 at Bartlett-Nichols Funeral Home, St. Albans with Pastor Jeff Ranson and Pastor Joel Copley officiating. A graveside service will be held at 11:00 a.m. Monday, February 1, 2021 in Centre County Memorial Park, State College, PA with Masonic graveside rites. In lieu of Flowers, donations should be made to: HospiceCare WV, 1606 Kanawha Blvd. West, Charleston, WV 25387 (hospicecarewv.org, 304-414-5170) or Shriner's Hospitals for Children, c/o Beni Kedem Temple, 100 Quarrier Street, Charleston, WV, 25301 You may visit Mr Tabor’s tribute page at BartlettNicholsFuneralHome.com to share memories or condolences with the family. Bartlett-Nichols Funeral Home, family owned and located at 409 Sixth Ave., St. Albans is honored to serve the Tabor family.

Thomas Edwin Tabor 87 of Hurricane, WV died January 25, 2021 at his home in Hurricane, WV of natural causes. Mr. Tabor was born in Charleston, WV, August 2, 1933 as the only child of the late Edwin W. Tabor and Gwelda Mallory Tabor of Charleston,... View Obituary & Service Information

The family of Mr. Thomas E. Tabor created this Life Tributes page to make it easy to share your memories.

Send flowers to the Tabor family.